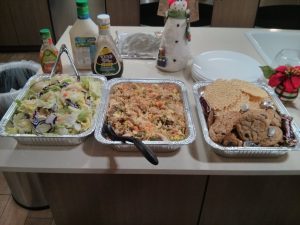 This month’s Jennie Day dinner at the Ronald McDonald House of the Greater Hudson Valley featured Chicken Fried Rice, with salad.  For dessert, we served chocolate chip cookies and, as previously requested, homemade pizzelles.  It’s unfortunate the House staffer who asked for the pizzelles wasn’t working tonight, but those who were on-hand assured us they would save a few for her.

We also brought trays to the hospital for nurses, doctors, and of course, the families.  December is a difficult month at the House and hospital, as the children and families would rather be anywhere else during the holiday season.  In one of the PICU rooms, I saw a man, gowned and masked, leaning over a crib, watching a baby who was attached to too many tubes, wires and hoses.  This was a stark reminder of how some families are forced to spend their holidays.

The staff at both facilities do their best to provide support.  We were reminded of our first stay at the House, which was just before Christmas, 2014.  I had originally asked if I could simply use the kitchen to cook our Christmas Eve fish dinner.  We ended up getting a room and stayed for over a month, our first long-term experience with the Ronald McDonald Houses.  We checked in only a day or so before Christmas, so when we saw huge stacks of gifts for the resident families, we were sure there wouldn’t be anything for Jen – there just wasn’t time.  However, Susan took a closer look at the gifts and found a bunch with Jen’s name on them, as well as some for her, and us!  What a great surprise – just a small example of the care and effort of the House staff , to make the best of an unthinkable situation.  The importance of the work these people do cannot be understated.