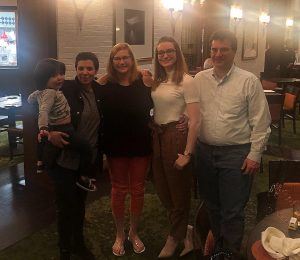 In 2018, the Foundation planned for two Jennie Foundation Culinary Scholarships. The first was awarded in May 2018 to Jessie Gayle, but as the year progressed, we had no news of the second scholarship. We inquired to the Culinary Institute of America, where the scholarships are awarded, and were assured they were still evaluating candidates for the award. Advancement Officer Erin Decker told us they wanted to be sure the recipient of the scholarship would be “as amazing as Jennie was”.

Last month, we had the privilege of hosting our second Jennie Foundation 2018 Culinary Scholarship winner, Alexandra Cerebelli, and her son Emilio, to a wonderful dinner at the Culinary Institute of America’s American Bounty restaurant. After meeting and talking with Alexandra, we can say without reservation the school’s selection was on target. Fittingly, we met on April 12, which would have been Jen’s 22nd birthday.

We spoke at length about Alexandra’s experiences as a single mother, raising a child while maintaining a rigorous schedule of classes and externships, and learned of the incredible support she receives from the CIA to allow her to complete her studies.

Before attending CIA, Alexandra ran a kitchen at a women and children’s homeless shelter, managed food donations and delivery, and also taught children’s cooking for a non-profit organization in Tribecca. Her goal after graduation is to continue to help those in need through better nutrition and job training. We discussed the Foundation’s monthly meal program at the Greater Hudson Valley Ronald McDonald House and are looking forward to her ideas to help us provide a new menu to the families and staff there.

Our donors have enabled the Foundation was able to assist Alexandra with expenses for supplies and transportation, and help keep her on track for graduation in July. Thank you as always for your support!